The UK is in the middle of a heatwave. The water butts have been empty for weeks and I can’t remember the last time we had rain. It is an absolutely glorious summer so far, taking me back to endless summer holidays as a child (it’s strange, isn’t it, how everyone remembers childhood summers as sunny, warm and dry?) and then, slightly later, weeks at university spent lying on the grass at the hall of residence, revising for exams and looking forward to an even longer summer holiday.

Some of the garden is thriving in the heat. We have had lots and lots of strawberries. Our strawberry bed is only in its second year but we are picking fruit every day. We have eaten strawberries with ice cream, with clotted cream and in crumbles. I have made a refreshing strawberry cordial to drink and stored jars of strawberry and rhubarb jam to brighten up a winter’s day. The strawberry apple charlotte was a particular success I thought. 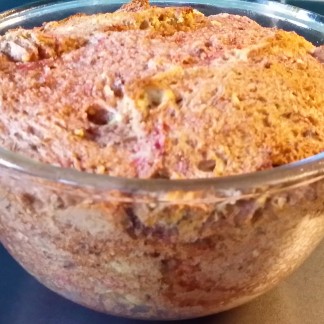 The raspberries are starting to ripen too (even the ones which self-seeded last year from next door and that we allowed to grow up in the veg plot) and I have had a whole five gooseberries on the bush we bought last year.

Other things are now suffering, though. The lawns and grass paths are brown, the cornus that we bought after Christmas is wilting in the heat and the lupins are also quick to feel sorry for themselves. We are watering every night, trying to balance the need of the garden for water with the need to use it cautiously. We only ever use watering cans anyway – we never use the hosepipe – but we are still conscious of the amount of water that we can use each day.

The cats are loving it and we are seeing very little of them. During the day they are finding a shady spot to snooze, sometimes taking refuge in the summer house where I ensure the door is open and there is a bowl of water for them. The summer house – or Sitooterie, as it would be known in Aberdeen – has undergone a total transformation this year. I really wanted a pretty, feminine space here so I set to and painted it an off white earlier in the year, with what was supposed to be a soft pink accent on the window, door frames and beams. Unfortunately the pink was a little, well, pinker than I had imagined. I wasn’t exactly aiming at a Barbie palace! I think we have managed to mitigate it slightly with a deeper shade of rug at least. Either way, the cats love spending time there and so do I. All three of us are often to be found chilling out up there when D gets home from work. One day, I might even get a second chair and then he can join us occasionally.

All the best houses have a name!

Sunning themselves on the veranda

It is the evenings when the cats come to life. Once it starts to get cooler, they disappear on their adventures and won’t come in. The Calamity Cat finds this a particularly good game. She will wait until we approach (if we have Dreamies to tempt her, all the better) and then either disappear under the hedge into next door or run away up the garden. One night this week, I went and sat on the bench and waited for her to come back through the hedge. The garden is a whole different place at night. Although it was after 10.30pm, there were still birds singing, although I think it must have been from their nests, as the skies seemed to belong to the bats zinging about. The bees had gone to their beds and moths had taken over the job of pollinating our plants. I don’t usually like moths, especially in the house – I fear their fluttering the way some people fear spiders. In the garden, though, they are where they should be, doing what they should do, and I love to watch them, albeit from a safe distance.

Finally, Calamity emerged from the hedge but shot past me before I could react. She sat on the lawn, a challenge in her eyes, as I cautiously approached. I could almost hear her giggle as she waited until I had thrown a treat to draw her closer to me. She snatched it up and then, as I made a grab for her, she ran. I followed her up the garden, through the gate into the kitchen garden where, as I expected, she was sitting by the apple tree waiting for me, the same challenge in her eyes. Again, I approached; again, she allowed me to come close before she disappeared into the veg plot. I finally ran her to ground in one of the beds, where she thought the potato foliage would protect her. She accepted defeat with good grace, especially when I gave her extra treats once she was safely inside.

I’m sure it will rain again one day and the cats will want to come inside again. We just have to hope that the garden will survive in the meantime while we enjoy the summer, just like we did when we were young.