Apologies for the silence of the past few weeks. It has been a strange time. Wrapping up my job was both mentally and emotionally draining so, after my final week in Aberdeen, I took a couple of weeks’ break to mark my huge life changes. I did take the opportunity to refresh the New Simple Life site though – I hope you agree that it is now cleaner and easier to see what is there and that the new home page sets the scene for what is within.

Spring has been slow to arrive here in North Yorkshire. The cold weather has hung around well into April and the snow was followed by days and weeks of rain. Each time the sun dared to peek out to see what was happening, it decided to retreat again and sleep for a bit longer. We have been lighting the fire much longer than in previous years and even the cats are reluctant to go too far from home in case they get cold and wet.

The poor weather may be deterring us from getting out into the garden, but the plants and wildlife are ignoring it and are moving into spring regardless.  Our patio pots are a riot of spring bulbs and I even found a lone daffodil bravely flowering in the compost bin

We have sparrows nesting in the hedges, starlings in the eaves and a pair of blackbirds have even built their home in the Pampas grass which forms a boundary between the flower and the kitchen gardens. Much as I love to watch them foraging for food on the lawn, I am concerned. The Princess has already realised that they are there and is trying to reach the nest. D caught her deep in its sharp fronds yesterday, too far in to be extracted by us but fortunately too high to reach the nest.

We haven’t been completely idle of course. While we wait for the season to finally turn, we have been potting on and hardening off the plants I sowed in the greenhouse in the autumn, mainly foxgloves, sweet peas and poppies. D has been busy too, sowing a range of veg, from carrots to beetroot, tomatoes to peppers and, after last year’s success, some sweetcorn. Potatoes are chitting on the sideboard in the dining room (surely why sideboards were invented) and we have bags of first and second earlies already in the greenhouse to give us an early crop.

Our potatoes are chitting nicely in the dining room 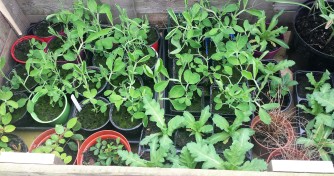 Sweet peas and poppies have gone mad in the cold frame 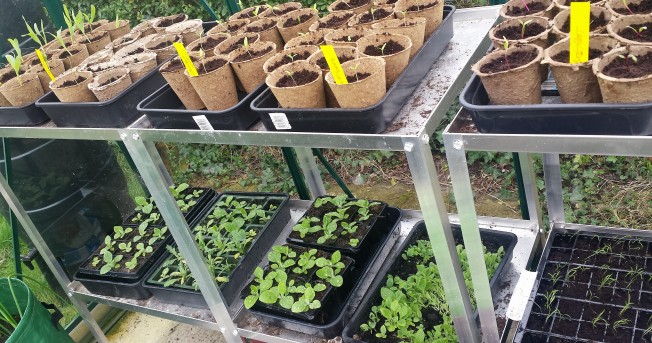 D has been busy potting on seedlings

The last of the sprouts from 2017 have been eaten and we are enjoying the final leeks with our Sunday lunches. What has been a surprise is that the garlic we planted last spring, which was a huge disappointment to us later in the year when very few plants appeared, has sprung up with a vengeance over the winter. We had already bought some more and planted them in both the greenhouse and in the tomato bed in the flower garden, so we should have lots of garlic for 2018 – vampires beware!

Our biggest project so far this year has been the area known as the Frog Patch. This is a large raised bed in the flower garden with a dry stone wall at its base. Aside from early daffodils, the buddleia and a rather attractive hebe which forms a protective hedge down one side, the bed was covered in a mass of geranium. It provided a burst of colour in early summer and useful ground cover for the frogs (hence our choice of name), but became an untidy mess for the rest of the year. So we decided that this was the year we would clear it and plant a new border.

Clearing the geranium on a rare sunny day last month was hard work and we will undoubtedly need to keep on top of it throughout the year as the roots are still very much alive under the surface. The soil is poor so we will also need to feed and mulch regularly to try to improve it as time goes on. When the geranium was gone, though, and the rest tidied up, we were pleased to see that the area was larger than we had thought, giving us scope for a little experimentation. We also uncovered a hellebore and a hosta which had been hidden by the jungle – welcome discoveries which we decided to keep.

It seems that, for us, a border evolves rather than being planned. We knew we wanted some heathers to give year round colour and ground cover with a nod to D’s Scottish heritage. Beyond that, though, we felt free to fill the space exactly as we wanted. I briefly thought about using a particular colour palette but we were soon carried away with choosing plants we liked, as well as moving some which had outgrown the space they had elsewhere in the garden and planting out some of my autumn sowings. The result is a little haphazard maybe, in some cases even clashing and yet it feels that it fits with the rest of our home. Both inside and out, our home has evolved with us over the past two years – not designed, not minimalist or consciously stylish, no high-end finish, but reflecting our love of colour and comfort and created with love.

7 thoughts on “Is it safe to go outdoors yet?”