And so Christmas is over for another year. The presents have been opened, appreciated and in many cases used already, such as the beautiful candle holder in the headline picture above. The dinner was cooked and eaten, TV watched and family visited. Finally, this week, we took down the tree and put everything away for next time. It was good to get the house back to normal, clean and tidy ready for whatever 2018 may bring.

The garden, too, is in need of a spring clean. We pulled up a lot of veg for our Christmas dinner – carrots, leeks, the last potatoes, parsnips and sprouts – so there are a few empty beds to clear and make ready for the new season. The sweet peas, foxgloves and poppies which have germinated in the greenhouse from seeds I collected last year need thinning and potting on and there appears to be a large amount of pruning to be done. One of D’s gifts this year was a good quality pair of secateurs and matching knife, so he has been out cutting down the roses and tidying a few climbers which were making a bid for freedom via the guttering on next door’s shed. After last year’s attempt at pruning the apple tree, though, we may leave that to the professionals this year.

I had planned to cut back the herbs, too, but the smaller birds appear to be loving the seeds on the lemon balm, so I have left them alone to be enjoyed. Fortunately, the cats don’t seem to have noticed the sparrows and the brightly coloured goldfinches so far. The Pampas flowers are already being stripped for nesting material too and, as usual, we are sharing our home with some variety of feathered friends, who are living in the eaves. I have also left the hydrangea flowerheads intact and their intricate structure has brought me much pleasure through summer and winter alike.

We haven’t had much snow here, much to our relief, but both the cats did go and play in it for a while when it was here. The Calamity Cat particularly enjoyed it, leaving a trail of paw prints in the previously untouched snowfall and pouncing on imaginary prey which was hiding in the strange white stuff. Once she had had enough though, she returned to us complaining vigorously that her paws were cold and her underside wet. It was fun for a time but could we make the nasty white stuff disappear now please? 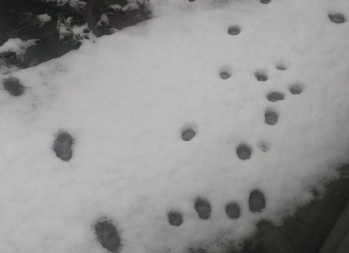 Paw prints in the snow …

“What’s this weird wet stuff then?”

Beyond the tidying and nurturing the start of this year’s plants, we are starting to plan for the coming season. We are going to concentrate on the flower garden this year. It’s a mature garden and we don’t want to lose the structure that we have but we want to put our own stamp on it in the same way as we have the kitchen garden and the house itself. More colour, more scope to experiment and play and more variety is our aim – it will be fun to see where we can take it as the year progresses and I hope you will stay with us for the journey!