Last week, I focused on the flower garden and how it had flourished while we were away. But what about the other side of the pretty cream-painted wooden gate, I hear you ask. What about the kitchen garden?

It’s probably fair to say results are mixed. We had moved the seedling carrots, leeks and sprouts from the greenhouse to the kitchen for the catsitter to water, along with the larger cauliflowers that we had also grown from seed but not yet planted out. So they were fine, until we got back at least. The day after we returned, we put them back in the greenhouse, unaware of just how hot the day was going to be and, unfortunately, it was more than our newly-germinated sprouts could take. The next day, we found them shrivelled to nothing in their tray, in spite of the automatic roof vents. Another lesson learned – the greenhouse can get too hot!

All the potatoes were doing well and we actually harvested the two bags that we had started off in the greenhouse before moving them outside a month or so ago. The first bag was disappointing, I have to say – the crop was tasty but only lasted us a scant two meals. The second bag was a better haul though. There is nothing quite to beat the excitement of pulling up the stems and seeing what lies beneath, burrowing into the earth and finding the treasure that is a potato you have grown yourself. The miracle of nature and its cycle continues to make me marvel – the fact that the discarded plant goes into the compost bin to help grow the harvests of the future brings me so much pride and pleasure. We also pulled our first few carrots, also from greenhouse bags. Although they are bigger than those we grew last year, they were still a bit curly. We have been told they grow well (and straight) in sand, so we might try that next year.

The other veg are coming on slowly. We made a classic mistake back in early Spring when, excited by our work replacing the raised beds, we planted lots of things out too early and the frost hit them. Nothing actually died, but everything stopped growing and most of it is only just recovering now. The sweetcorn, planted slightly later, is doing better but has suffered from attention by, we think, the fat and well-fed pigeons who hang out in the apple tree and laugh at the cats. Still, we have some garlic coming up slowly, as well as leeks, onions, carrots and some parsnips that we sowed straight into the ground and that we are hoping will be ready for our Christmas table. The salad that had done so well over the winter is much less happy in this more clement weather, unfortunately, and has bolted. While the flowers are pretty, as far as salad goes, we will be relying on the various tomato plants we have around, which appear to be doing well.

In fact, most of our fruit is thriving. In the orchard, the cooking apple tree is already groaning under the weight of the coming fruit and we are back to picking up small unripe windfalls daily. The eating apple appears to be doing better this year as well and to my joy, the plum is also promising to bear lots of fruit after a barren year last year. The rhubarb loves its new home too, in spite of the apples landing in its bed each day. I can feel a jam-making session or two coming on over the next few months. As the new gooseberry is still settling in, we definitely won’t be seeing any gooseberries this year, probably to D’s relief, as he doesn’t like them but the blueberry is starting to show signs of fruit and is the most beautiful colour when you look closely. 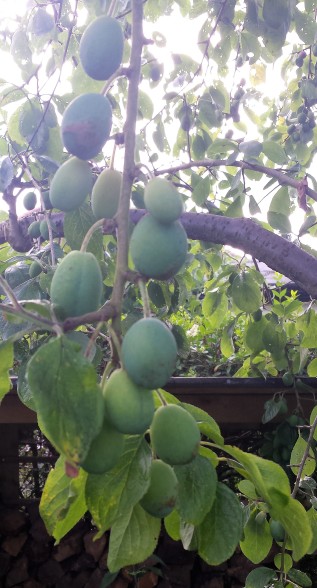 Hooray! We will have plums this year

The blueberry is currently a glorious shade of pink

We are getting a few strawberries too although, just like my childhood recollections, it was a toss-up whether we got there before the birds. In the end, D created a fruit cage out of spare wood from the garage, some netting, a couple of bamboo canes and a lot of ingenuity. One of the canes has weighted the netting so that it will sit in place, but it can be lifted back when we come to pick the strawberries. It makes the harvesting less of an adventure in a way, but at least we are getting some of them. The birds get up earlier than we do, so they were definitely winning the race!

And, speaking of birds, they are also thriving. There is a blackbird family next door and young birds of all descriptions everywhere you look. It is lovely to watch them but it is always with a little trepidation, in case one of the cats gets too close. The Princess, particularly, is hunting again when she can, although both the neighbour and I are determined to protect the blackbirds. We hear him banging on the window regularly to chase her off and we are constantly bringing her inside when we hear the shrill alarm call of the parent birds. We have found a few frogs as well, including one who had made it into the garage and resisted all attempts for us to rescue it for some time. Eventually D got it into a bucket and we decanted it into the aptly-nicknamed Frog Patch area of the garden, where they usually shelter in the undergrowth, enjoying the damper conditions caused by the drystone wall.

Hopefully, we are now entering the stage where the kitchen garden will be little work beyond watering, pulling up the odd weed and harvesting, while the flower and front gardens seem to require more input daily to keep on top of the weeds and the deadheading. We need to remind ourselves sometimes that a garden is also for sitting in, for meditating, reading, chatting and enjoying. The cats try to tell us – now all we need to do is listen.