September was a funny old month. We had what felt like the hottest days of the year and probably the most rain as well, leading to some pretty spectacular rainbows, like the one at the top of this post. I was sure I saw the end of one in the field in front of the house the other day. I was so tempted to go and look for that crock of gold …

The cats have been totally confused by the change in the seasons as well. The Calamity Cat, usually the more home-loving of the two seems determined to make the most of the weather and is constantly asking to be outside, crying at the patio doors when we have safely closed the shutters for the evening. Does she have a secret boyfriend, I ask myself?  The Princess, on the other hand, is staying closer to home, coming in at teatime and not straying further than the patio until, at sunset (which is getting noticeably earlier every day), she comes in and settles down. It is out of character for them both, some kind of bizarre role reversal, and we don’t quite know what to make of it. 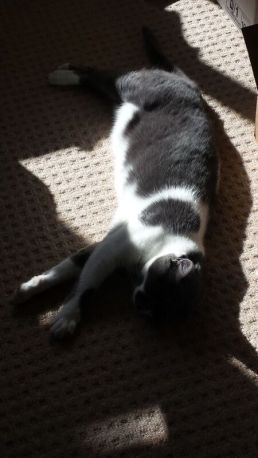 while the Princess lounges indoors

One thing they are in agreement about is that, if winter is coming, they need to stock up. We tell them and tell them that the Sheba doesn’t run out in the winter but they aren’t convinced. “We need to lay down fat reserves, so we don’t starve later,” they assure us as they ask for elevenses, then lunch, then afternoon tea and supper as well as the breakfast and tea which they get as standard. We recently received a bulk order from an online store, in an attempt to save some money, but they see the full cupboard in the garage as a personal challenge and seem determined to empty it as fast as they can.

All the food is giving them an extra burst of energy. They are often to be seen bouncing up the lawn, playing chase with the wind or a leaf or some strange creature that only they can see, making us laugh at their sheer goofiness. (The Princess, of course, is only goofy when she thinks there is nobody looking but we have rumbled her a time or two). When they aren’t doing that, their favourite game is playing Hunt the Bulb. We cleared a space in the garden last weekend and planted loads of Spring bulbs, hoping for a splendid display next year. The girls were delighted. “A huge patch of bare earth? Just for us? You shouldn’t have … ” No, we probably shouldn’t, as they have been digging in it ever since.

Depressing as the nights drawing in can sometimes feel, there are so many things to love about Autumn. The colours, the cosy evenings in front of the fire with candles flickering around the room and, of course, the return of Bake Off and Strictly Come Dancing. All four of us snuggle down in the living room together, the girls jostling for position on the rug before the fire, or sleeping on the armchair under the window. Sometimes they take it in turns on the chair but Facebook and Instagram followers will recognise the photo below that I posted in the week of them looking all very loving and sisterly. The truth was actually that the Princess got there first and Calamity’s bid to oust her failed. She started by jumping up and giving her sister a good grooming – that often works as the Princess will take being groomed as her royal due for a while, but then get ratty when she has had enough and move. However, she must have been especially comfy on this occasion, so she stayed put. Calamity thought very hard about her next move and, in the end, simply sat on her. Now Calamity isn’t the lightest of cats at the best of times and, with all the extra Sheba, you definitely wouldn’t want her sitting on your head. The Princess was forced to move over slightly and that was all Calamity needed. With the ease of much practice (a technique she has perfected on us when she spreads out on the bed overnight), she wriggled into the space and settled down. They look so peaceful and happy together, don’t they? If only it were always like that.

They still have their responsibilities, of course. The Princess has fortunately eased up on Rodent Patrol, but Calamity still has the coal to inspect and we will be having logs delivered soon, so she will need to supervise while we move them up to the log store. D is taking some time off and is adding to the library shelving, so she has quality control to perform on that as well. This unit is even more important to get right than the others, as it will sit under the window in the study and be an important lookout point for them both. They have also pointed out that I could practise my soft furnishings training by making them some nice cushions to go on top. I am thinking about it, but they will have to wait – we don’t do cushions until November. I’m still on valances at the moment and they wouldn’t be quite as comfy – too many pleats. 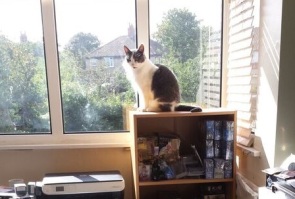 Calamity on the old bookcase in the study 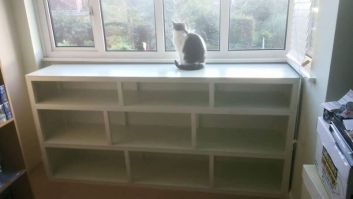 So our little family is sliding gently and contentedly towards winter, in theory at one with the seasons. Ask me again when the snow comes – you might find my serenity a little strained at that point. We are hoping, at least, that the kitchen will be totally finished next week (apart from a few accessories and, of course, new window treatments – that might be my first big project, after the cushions for the cats of course!) So, who knows, I may even have some pictures for you next week – yay!