While the kitchen is in a bit of a haitus, waiting for the work surfaces to be made, I thought I would move on to other, possibly more interesting topics. It’s been a strange couple of weeks for the garden. There are signs in the flower garden that Autumn may be on its way, as some of it is starting to look a little tired. The veg patch and the orchard, though, are thriving. The cooking apple tree is groaning with fruit and we are picking up windfall apples daily. The challenge is, what to do with them all. I made lots of apple sauce for the freezer before the kitchen was packed up and we have had as much apple crumble as we can take. So, today I’ve been feeling like one of Trisha Ashley’s heroines (I love her novels – full of women living a busy and reasonably self-sufficient lifestyle, and doing it on their own terms. OK, there’s usually a handsome, grumpy hero as well, but that’s not the appeal. Honest! Try “The Magic of Christmas – I love Lizzie Pharamond.) I’ve been wrapping apples in newspaper and storing them up for later in the year. I would never have known how to do that without those novels. Who knew romantic fiction could be so informative! I have no idea if they will last but it’s got to be worth a try. 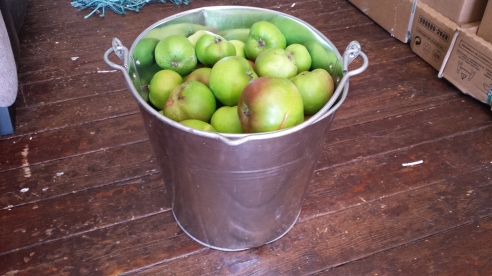 Windfall apples from our tree

Storing the apples in newspaper

Of course, the Calamity Cat had to help us pick the apples. We have wood pigeons roosting in the tree, but they seemed totally unfazed by her presence – they seemed to almost be daring her to have a go and, in the end, she admitted defeat and simply turned her back on them as if they weren’t there.

We have now gathered in all the potatoes, apart from a couple of plants that came up on their own outside the actual beds, and they are all safely stored in a sack in the pantry. Next year, we want to try and find some seed potatoes that can be planted very late – surely it must be possible to have potatoes through the winter. We are also starting to gather our second crop of carrots. They are still as curly as ever, but we are hoping to rectify that next year through vigorous digging. We have had our first leeks and we even pulled a sprout plant today – probably too early really, but the cabbage white butterflies have loved these plants over the past few weeks and we would rather feed ourselves than the caterpillars!

You may remember that we failed totally with our first tomato plants, which died pretty quickly in the greenhouse. Our second attempt was very much an experiment – we bought 4 plants – 2 each of different varieties – and planted one of each in growbags. One bag we put in the greenhouse, one on the patio and then we waited to see which would be more successful. The result has been pretty decisive – the patio-grown ones are larger, with a much larger crop and tastier too.

The real surprise today was the rhubarb. Beginner as I am, even I know that rhubarb is totally out of season but the bed we have for it isn’t big enough, so we decided to thin it out a bit. The result was a rather delicious rhubarb and apple pie with ice cream. I went for a saltire design, bringing a bit of Scotland to Yorkshire.

Overall, we are so proud of what we have achieved in our first growing season and it has motivated us into making lots of plans for next year. I am going to get my glass greenhouse for a start! Hopefully, this one won’t blow away like it’s on its way to Oz. D is intent on creating all new beds in the veg patch with scaffolding planks, hoping to expand the growing area. A new greenhouse means more water butts and a new toolshed, which will be sited out of the way behind the summer house, along with a second compost bin. I would also like some soft fruit in the orchard – we spend so much money on raspberries and strawberries every summer and I have always hankered after a gooseberry bush, just like my much-loved great aunt used to have in her garden. My childhood summers were filled with picking strawberries (which she turned into delicious ice cream with nothing more sophisticated than a plastic container and a tiny freezer compartment in her fridge), shelling peas and gathering blackberries from the hedgerow which she made into pies, crumbles and jams. She would be so proud to see me now and finally, I feel like I have come home.

4 thoughts on “Bringing in the harvest”