After the cats’ traumatic week, we were hoping for a quieter time of it this past week, but it was not to be. The Princess suffered from her passionate defence of our home and ended up at the vet with a nasty bite on her tail. After a couple of magic injections, however, she soon rallied and spent the next few days making up for the time she had languished feeling sorry for herself.  She had a spurt of energy and vanished for hours, returning only to bring us regular contributions to the family table, mainly in the form of poor unfortunate rodents. When we were less than impressed with her gifts, she ate them herself, leaving absolutely nothing behind. While I was glad to see her better, I admit I was glad when the injection wore off and she returned to her normal self – adventurous, but less blood-thirsty!

Meanwhile, Calamity was having a few adventures of her own. Although she doesn’t go as far as the Princess, she has been stretching her wings a little and has spent less time in the relative safety of our garden as a result. On Friday, just before we were due to go away for a much-needed weekend break, she ran up against the black cat next door. I could hear the howling, but I couldn’t reach her. The fight went on for some time – our gentle Calamity Cat becomes ferocious when threatened and will not back down. Eventually, she crept home, clearly feeling sorry for herself, while the black-coated victor paraded across our lawn, making the clear statement that he had won the day. Poor Calamity! She didn’t appear hurt, apart from a deep scratch inside her ear, but she was exhausted and extremely stressed.

I was even more stressed at the thought of leaving her. However, our weekend had been booked for a while and we were in sore need of a break. Knowing that we will never find a paid cat-sitter to match the amazing PetSitting Pixie up in Aberdeenshire, who was loved by both cats and so by us, my mother had agreed to look after them for us and, armed with the vet’s details just in case, she urged us to go. She was right of course – after sleeping it off overnight, Calamity was back to her usual self the next day, sitting on Mum’s pillow and demanding breakfast at the crack of dawn.

Once I was reassured that she was well and that the girls were having fun with ‘Nanny’, I could relax and enjoy our weekend away. We had booked a B&B in Scarborough, partly to celebrate D’s birthday the previous week. (Shhh – it was a number ending in a zero – don’t tell anyone!) The only time we had tried to visit Scarborough and Whitby before, not long after we met, it had rained solidly the whole time and we couldn’t do anything. I was determined this time that we would explore the area properly and have a great time. And we did. I can thoroughly recommend Scarborough Castle and a delicious fruit scone called a Scarborough Scallywag that we found at the market. The North Bay Fisheries chip shop looks unassuming, located in the quieter North Bay area, but was one of the best fish and chip shops I have ever been to. Be prepared though – we never saw it without a queue. Unlike the more famous chip shops in the area, it was very reasonably priced as well.

View of the Parish Church in Scarborough. Anne Bronte is buried in the churchyard here

View from the Castle

On Sunday, we headed up to Whitby and I was reminded just how beautiful a place it is. We wandered around in the sunshine, enjoying each other’s company and the happy buzz of other holidaymakers, feeling like we had been away for far longer than 2 nights. We returned home feeling refreshed and happy. It just proves that, however much we love our New Simple Life here in Yorkshire, sometimes even we need a change of scene.

Church near the Abbey in Whitby 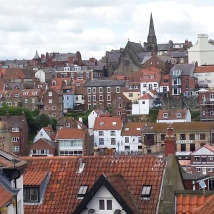 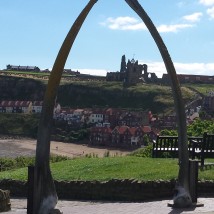 And thank you, Mum – the girls had a lovely time with you!

2 thoughts on “Ups and Downs”